How are you enjoying the tour so far?

Tommy Joe: It’s been amazing, it’s been surreal I’ve always wanted to do something like this. I’ve never actually been on a real tour like, you know what I mean, just like kinda slumming it in a van and this is actually like my first big deal so it’s been a lot of fun.
Isaac: Amazing, it’s amazing it’s a really fun group of people and really fun, fun challenging show to play every night and to play drums behind Adam, I’ve never really, it’s pretty amazing to play behind a voice like that.
TJ: Yeah you get kind of spoiled you don’t ever wanna be in a different band with a different singer
I: Yeah, every band I’ve played with has it’s strengths but playing behind Adam’s voice is just super. Extraordinary.


Is that the biggest difference?

I: No, many things kind of differs from what I’ve ever done. It’s really, before I played with them and I went and saw this show I just really liked kinda how dramatic and almost like theatrical it is. It’s kind of like a play or something it’s kinda like a set story that gets told every night and that’s kind of different it’s kind of like there’s a lot of emotion in it but it’s kinda rigid schedule in show you know

When did you decide to go for music, to start focusing on music? At what age and why?

TJ: I was twelve. Well, I’ve always been really into music ever in like my first and second grade I was like Depeche Mode is my favorite group and then I was into like Midnight Oil, remember that band? I loved them, I loved all these tons of bands Metallica. I grew up listening to that, The Doors, Jimi Hendrix and everything. And then when I was twelve I used to see my uncle playing guitar and it made me wanna play. And then I just kinda picked up like a cheap 20 dollars guitar was all I could afford one so I had to like wait and you know and yeah it was pretty bad. And then I ended up just like learning Nirvana songs and Jimi Hendrix songs and everything and I started going from there.

So you’re self taught?

TJ: Mhm, I’ve never taken a lesson I’d actually like to now
I: And this is his first band he plays bass in you guys know all about that.
TJ: Yeah, so I’m actually becoming a bass player now it’s cool.

How about you Isaac?

I: Similar story. I really loved music from a young age. I was buying vinyl at like age five or age four and like when I was like eleven. I actually wanted to play music when I was seven but it was just too hard. I tried to learn some Guns and Roses songs and it was too hard but it really took on when I was eleven and actually I started out as a guitar player too and then I moved to drums later. I never had any lessons either I was just lucky enough, my dad is a musician and my brother is a drummer so I was just lucky enough to start out learning by playing with other people.

What instruments do you play?


I: I’m an okay guitar player which makes me an okay bass player and I mainly play drums and percussion.
TJ: I just play guitar and bass.
I: You can play drums too!
TJ: A little bit kinda, I can keep the beat. If I had a drum-set I could get kinda good but I really. I’d love to play the drums, I’m always beating on things.

Do you have any more say in the creative process with Adam than with previous bands?

TJ: We kinda, we like you know, we got hired after the album was done and everything so we never got to put our own twist on the album. And usually if he doesn’t like something he’s like let’s do it this way and it just happens but you know we put our own edge to it and I mean the album obviously sounds a lot different from the live shows and just kinda like, the albums great but we kinda add our own things to it.
I: Yeah, he doesn’t micromanage what so ever. But it seems like we all really trust his instincts. So he kinda leads just by, just by being confident, but he definitely doesn’t micromanage.
TJ:And he definitely has a vision what he wants and gets his point across when your in a soundcheck and stuff like that if he wants something in a certain way he knows.
I: And things slowly. I’ve only been playing in the band for two months or what ever but things slowly take on a life of their own without anybody telling anybody what to do you know.


I: Yeah.
TJ: Oh yeah! I couldn’t even imagine playing with other people now like that would just be weird.

Could you imagine before this tour started all the fans, fame and support that came with it?


TJ: Yeah I had no idea all the fans would come with this I was just blown away. It was nuts after the first day he put the names up on the internet, like mine, I wasn’t even in any other big bands really so every one was like you know like yeah Monte from Madonna and Lisa from the Pumpkins and LongineuYellowcard, it’s kinda like. And then I signed up on twitter, I never wanted to get a twitter account, I was kinda like I don’t ever wanna you know twitter, come on why, and everyone was like you should so I was kinda like oh, okay.
I: And he became the biggest star of them all… [Laughs]
TJ: Yeah and then next day, I had the email attached to my phone and it was like, I had like 1200 emails the next morning. I was like whoa!

I: Yeah similar thing, it’s funny because I didn’t really have a twitter account either but my brother’s wife is an Adam Lambert fanatic before any of this happened that’s actually how I heard his album. She told me you gotta get a twitter his band is active on twitter you should go on twitter. The next morning I woke up I had like 3000 followers. So the main thing is just like how positive and Adam seems to breathe this positive energy and this vibe and his fans so it’s the coolest group of people because I replaced LP that is an incredible drummer and so I was kinda oh man, like these people might kinda like revolt against me, people don’t like change, but people were nice to me and sweet and encouraging and you know, he doesn’t know it but showing up on the tour when they’ve already been on tour for months it was intimidating to like join this new group of people that seemed to be really be connected but the band and the fans and everyone made it pretty painless for me and I thank them.

TJ: I remember you was worried that first night.
I: I was worried for like a week, I didn’t eat.
TJ: We went to dinner me and him. And I was like dude trust me Adam is a real good judge of character so if you know. You can kinda like I’ve made so many friends over this passed year like you know like people that I’m gonna be really good friends with for a really long time and it’s really awesome.

Do you feel like you’ve made friends for life in the group?

TJ: Totally, yeah I can never imagine not having them in my life it’s weird. They are all like brothers and sisters it’s nuts. Like they know every little thing about me I can like open up and like be my goofy self around everybody and you know say weird dirty jokes to each other and you know what I mean we can say what ever we want. Nobody judges you that’s why it’s a good group to be around
I: Yeah I think Adam surrounds himself with really sweet people and it’s a really interesting great group of people.
TJ: Even people that aren’t on the tour with us, like his friends back home that I just met through him and I’m good friends with them too they are like great people you just wanna talk to all the time it’s really cool.

What are you looking forward to with your future in the band?

I: I just started playing with them and a friend of mine, actually I gotten her to play drums, since I was in a band called Loudermilk and basically since then, for a few years I was like just being a musician for hire, and I played this only for a handful of people like that, but one of the first guys I played with who ended up becoming a really good friend of mine his name is Jeremy Fischer he’s a Canadian artist, but he told me. This is long… He told me Isaac you need to do what’s best for you cause I’m always gonna do what’s best for me. When I play drums so I just started playing with Adam and I’m just happy to be here now and I don’t know what his next album is gonna be like what type of drummer he’ll need but. I would love to play with Adam.
TJ: I wouldn’t go anywhere unless he just slap me across the face and tell me to get out of his life, but otherwise no.
I: Until he hits me, when he hits me I leave.

We wanna thank Isaac Carpenter and TommyJoe Ratliff for making the interview and making us so totally at ease.

And Lane and Nina for making it possible!!! 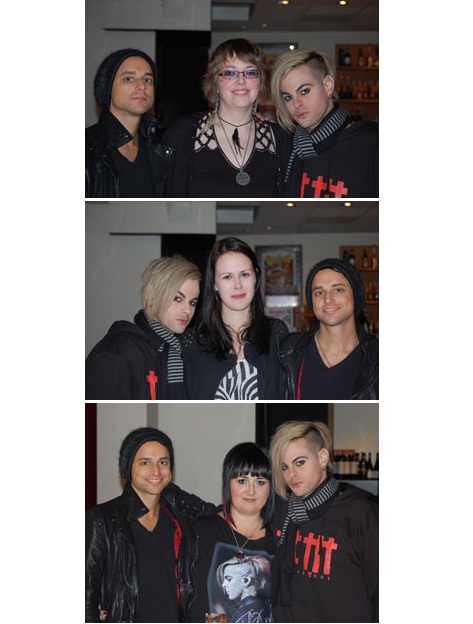 TJ: I wouldn’t go anywhere unless he just slap me across the face and tell me to get out of his life, but otherwise no.