Adam is a mega celebrity. Every word he utters will be scrutinized. As such, he should have realized that his labeling of Boyle's album as "terrible" would result in the stir it's created. We simply pointed that out.

Aside from those that simply don't have a taste for his music, people hate Adam Lambert for one reason: he is a proud, gay man. These critics are homophobes. We will never cater to them, we will only pity them and nothing we say will ever change their minds.

While we admire Lambert's fans for their enthusiasm and dedication, we sometimes feel as though they treat Adam like he's a child in need of their immediate, undying defense.
Lambert would be the first to tell them thank you... but calm down. He's not a saint. He's just a regular person. That's really Adam's main appeal: he's a normal guy that is open to discussing his sexuality and appreciates the opportunity he's been given. But he may say a dumb thing or two. He may release a single we dislike. When that happens, we're gonna call Adam out on it. Are readers entitled to get mad at us for it? Absolutely.

News Of The World 27. veebruar - http://www.newsoftheworld.co.uk/showbiz/xs/742048/Adam-Lambert-Americas-new-gay-idol-on-sex-drugs-and-Simon-Cowell.html

SINCE leaving Simon Cowell speechless with his sexually charged performances on American Idol, outrageous pop prince Adam Lambert has become one of the most controversial stars in the States.

The openly gay 28-year-old's raunchy routines, unique style and outspoken attitude have seen him dubbed Lad GaGa (although he thinks his close friend Lady G should be known as "Madam Lambert").

And for that reason, he's about to take the UK by storm, with his first visit planned for next month.


Adam at New York fashion launch earlier this month
Adam invited me to hang out in New York where he revealed for the first time that, despite being 'out', he gets off with guys AND girls.

"I get girls coming on to me a lot," he told me over a pink cocktail in Manhattan's trendy Hell's Kitchen district.

"I find women beautiful and I have been known to make out with girls at parties especially when there is alcohol involved.

"I am a pretty open-minded person and I WOULD have sex with a woman.

"Although I am not sure about a relationship, anything is possible because I am really comfortable with sexuality generally."

And like GaGa before him, Adam - whose inspirations include Boy George and David Bowie - is also open about his crazy adolescence, which included drug use.


"I went wild and I was experimenting with certain substances," he disclosed.

"It didn't get to the stage where it ruined my life or where it was anything too serious but it was definitely something I tried.

"At 26 I started running with hippies, going to underground events, I was really drawn to that crowd, everyone embraced each others differences."

And in a swipe at his critics, Adam blasted: "There are so many parents who are too conservative in America.

"There are certain drugs out there that are really fun and recreational and can mean a good time.

"I'm not an advocate for drugs but it is all rock and roll and we are all adults."

GaGa wrote a wicked song called Fever on Adam's debut album For Your Entertainment after they became pals.

"It is a great collaboration but there is mention of a guy in the lyrics so they wouldn't play it in the States because we can be so conservative," Adam explained.

He added: "People call me the Lad Gaga but I reckon she should be the Madam Lambert. I mean, I am older!

"But seriously, GaGa is someone who appreciates the artists of the 70s.

"The acts doing well now are theatrical, that is what makes a popstar nowadays.

"Not many men have been going that route lately, I eased myself in by taking risks because I wanted people to understand my music first."

But then Adam caused a huge controversy with a provocative performance at the American Music Awards where he kissed a male band member and simulated oral sex from a bloke dancer.

"I was overtly sexual on stage so I invited more conversation about my sexuality.

"But there was a lot going on before that performance that charged me - Out magazine criticised me by saying I had a lot of responsibility to be out and be proud.

"I was thinking: 'Is this gay enough for you?'

"I was being over the top and crazy, it is less to do with my sexuality and more about my style. That is what it came down to.

"The song is about sexuality and sexual dominance and it is threatening to some people."

Runner-up Adam's sexuality was a talking point during his time on Idol from early on.

"A bunch of pictures of me and my ex-boyfriend kissing came out and I thought: 'Oh no, this is going to ruin it.'

"In the past there has been speculation around artists that were gay and it does hurt your chances.

"But I am not ashamed of it for one second, I just didn't want it to overshadow the singing.

"At the end of the day it is hard being one of the first who is out.

"I don't want to push my sexuality on anybody. I like to keep people guessing and keep it fresh.

"I didn't want the label to take precedence over what I was there to do."

Despite helping turn him into a star on the show, Simon Cowell is not involved with Adam's career because he's signed to rival Simon Fuller.

"I knew he wasn't going to be involved in the album but I really enjoyed his stamp of approval on the show, it meant a lot to me to get his praise from week to week.

"I am more out the box and alternative than Simon is. I have very strong opinions and I voice them actively."

Adam, that's why I think you're going to be one of most exciting new popstars of the year.

Mulle meeldis see kõik:
"I got a letter from a very conservative Mormon who was devastated when I came out as gay. But because she enjoyed me as an artist she decided to educate herself and desensitise herself and accept homosexuality. I'm fortunate to be in this position," he says.

Mulle meeldis see kõik:
"I got a letter from a very conservative Mormon who was devastated when I came out as gay. But because she enjoyed me as an artist she decided to educate herself and desensitise herself and accept homosexuality. I'm fortunate to be in this position," he says. 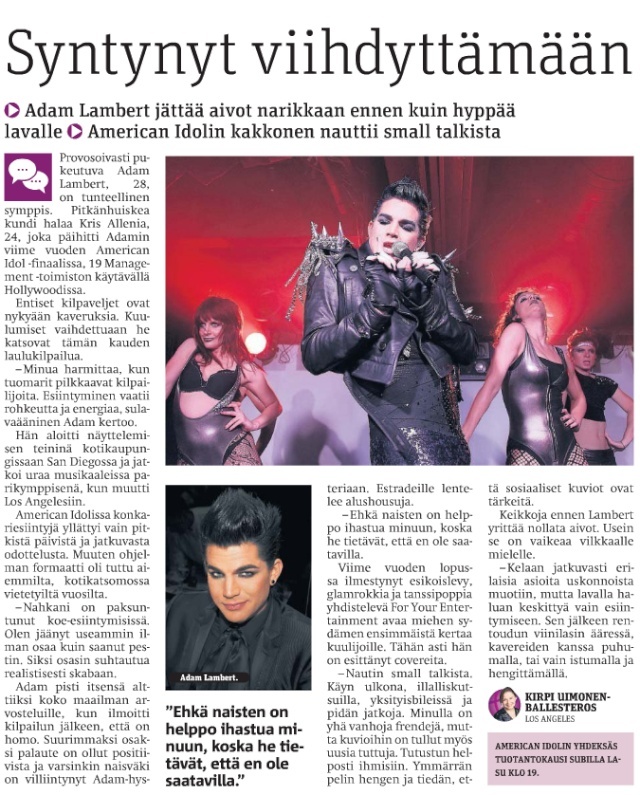